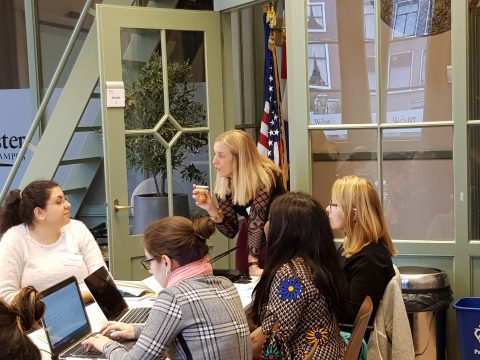 There was an exciting buzz in the air last Sunday evening in the 150-year old heritage building belonging to Webster University Leiden, as Leiden Vice-Mayor Martine Leewis handed out the awards to the best teams. Nearly one year in the planning, the WBII, in collaboration with the Digital Leadership Institute (DLI) in Brussels, Webster Leiden Campus, the Women Entrepreneurship Platform (Brussels), Google, Ataro Food & Spices, and many other partners and friends, were so pleased to hold a first in the Netherlands — a digital skills event for female starters. Some 30 women students and professionals participated in the Move It Forward – Female Digital Starter Weekend workshops, learning how to launch an e-business in the cloud, build a website and app, and hone their skills in Search Engine Optimization and e-marketing.  In addition, over 10 professionals, including trainers, coaches, jury members, and support staff, and a crew of 4 outstanding students, ensured that all aspects of the event were covered. 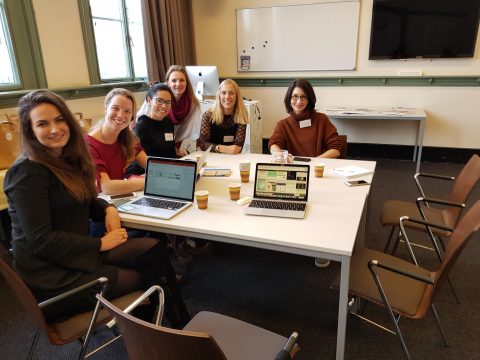 During the 2-day week-end programme, a record number of over 15 business ideas were generated by the participants. Of these, 6 were selected on which to move forward.  Teams were then formed, business ideas were developed, and on the last day, pitches were presented to a jury. Three projects won Awards, namely:

Menocompass – a project to provide support for women going through menopause — Overall Best.

Recipes Abroad – startup to provide expats with information about spices and ingredients — Most impact.

Here-She-Is – a project to support deeper and more meaningful connections between women — Most innovative.

“Thank you again for this unique opportunity of Women’s Business Initiative at Webster University Leiden.

During the Female Digital Starter Weekend, and with the help of the coaches, I was able to prepare the pitch of my startup idea. The questions and feedback allowed me to clarify what I have to focus on. All the inspirations and positive energy received during the weekend give me the determination to go forward and realize my idea.”

Keynote Speaker, WBII Member, and Webster graduate Ebere Akadiri, owner of Ataro Food & Spices, reflected on her own efforts to launch her website and connect with her audience by using social media. She eloquently encouraged the participants to first identify their passion and vision when building their business idea, and look for what makes themselves special.  Akadiri also sponsored the delicious Saturday evening dinner, which featured dishes prepared from recipes in her West African cuisine cookbook. With her idea for the project Recipes Abroad, her team won the award for the Project with the Most Impact.

Google Trainer Carina van Selling took us in her workshop through the ins-and-outs of Google advertising and Search Engine Optimization. She also met with the teams and advised them on their projects, and she did all of this on a Sunday morning, starting at 8:30 a.m. She only left in the afternoon once she had met with all of the teams individually. Carina told us:

“Wow, what a great event it was. I was very much moved by the warm welcome. The energy in the group was overwhelming and the women were so dedicated. Thanks for taking this initiative! My belief is that both digitalization and empowering women are keys to a better world. Needless to say that a combination of those can even be an accelerator.”

Katja Legisa, Manager of Brussels Incubator from DLI, has given these trainings in over 10 cities in Europe and beyond, and stated:

“We were pleasantly surprised by the large amount of business ideas the participants had; some ideas were already well defined and in early development stage, which is not always the case. Also, the well-chosen speakers clearly facilitated the participants to structure these ideas even more, resulting in a delivery of excellent projects and potential start-ups at the end of the event.”

Ron Lemeij, of Eisenfelt Academy and coach at the PLNT incubator in Leiden, led a workshop for the teams on how to ‘Pitch without a Glitch’. Pim de Bokx – Chairman of the Dutch Incubator Association, and Sandrine Shuman, Adjunct Professor at Webster, also supported the teams as coaches.

Participants told us that they were moved by the history behind the Webster Leiden campus building. In fact, Webster’s classes are held in a building that is a designated heritage property dating from 1869, and originally built and used as a girls’ school. Team members said that they felt a special connection to the building when they were working on their projects, due to its history and relationship to girls. Milena Milankovics said that the Webster University building “…made this event even more special and gave me an extra motivation to ‘move women’s issues forward”.
The girls’ spirit must have been in the air this past week-end, because the Move It Forward Female Digital Starters Week-end was a resounding success. We are already being asked ‘how we will follow up’ and ‘when the next one will be’! Jury member Mary Sobiechowski summed it all up, when she stated:

“It was an honor and a wonderful experience! It was quite incredible to see what was produced in a mere 2 days.”