Some 21 participants coming from wide variety of backgrounds attended the 5th and latest edition of the WBII’s Start Your Own Business Seminar (SYOB) held from 6 – 10 p.m. at the World Trade Centre in The Hague. The seminar is held at least twice per year by the Women’s Business Initiative International (WBII) to support all members of the international community, including both men and women, who are considering starting their own business in the Netherlands.
Participants included those who were thinking of starting a business, some who already had a business idea and wanted to check to see how best to proceed, and others who were just exploring the idea as an option for their future and wanted to get a better idea of what was involved.
At least 5 different topics about the general differences between starting up a business in the Netherlands and in other locations were covered, including:
• The legal and financial considerations;
• The ‘reality check ‘ – is this something that I want to do and is this a viable business concept;
• Identifying all of the next steps to move the idea forward; and finally
• The importance of networking, and building up your network ‘Dutch’ style.
Christine Dahl, of Dahl International Tax Law –a recent SYOB participant who has successfully transitioned from paid employment to become an entrepreneur — shared her own experiences on how she was able to accomplish this. The World Trade Centre’s Business Centre location was the perfect place to hold the event, with their variety of temporary office solutions and ‘hot-desking’ opportunities for starters.
Thanks to all of our speakers, including: Sinead Hewson (TpEBO), Marcel De Lijster (Down to earth Dutch), Michiel Heffels (Heffels Spiegeler Advocaten), Ute Limacher-Riebold (Ute’s International Lounge), Natacha Villedieu Silvestre (Optirisk Solutions), Charlene Lambert (mlmc) and the many volunteers who did so much to organize and run this successful event.
WBII member and artist Alexandra Arshanskaya (Arshanskaya) drew a great summary of the main points, which says it all! 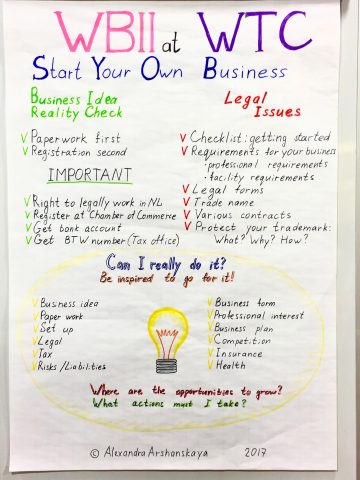